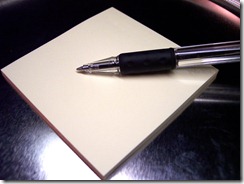 As I was preparing to leave the congregation discussed in the last post,  a question came up in a men’s meeting one night, “Jerrie is running around, trying out about every other Sunday. Are we paying him on the Sundays he is gone?” I was asked to explain.

“Yes, I am being paid”, I replied.  “When I came here eight years ago, the elders and I agreed that if either of us decided it was time to terminate our relationship, I would be given ninety days with pay or until I found another congregation, whichever came first.”  During those eight years, two of those elders had died. The third one had resigned.

Someone asked the resigned elder, “Is that the way it was?” He said, “It seems like we talked about that, but I don’t remember what we said.” I was in an embarrassing situation. After some discussion, a deacon who had been with the congregation since its beginning and who was the treasurer said, “Brethren, we have had that agreement with every preacher we have ever had and that is the way we will treat Jerrie.” The person who had asked the question was satisfied.

That was close. What did I learn from that? Contracts, job descriptions, and written agreements are not just for dishonest people. They are for good Christian forgetful people, for people who die, and for people who value relationships and harmony too much to leave it to chance and fragile memory.

I have had people suggest that it is not very spiritual to require a contract and a signature: “Back in my Daddy’s day, people made agreements and shook hands. Their word was their bond.” That’s fine if it worked for your Daddy. However, I have seen the truth in the Chinese proverb, “The palest ink is better than the best memory.” God must not have thought that writing an agreement was unspiritual. He has been recording His covenants with man for thousands of years. Yes, some of it was even written in stone.

I have learned that contracts are not for dishonest people. Contracts are to preserve and protect agreements made by dead people and forgetful people.

Posted by Jerrie W. Barber at 4:46 PM No comments: 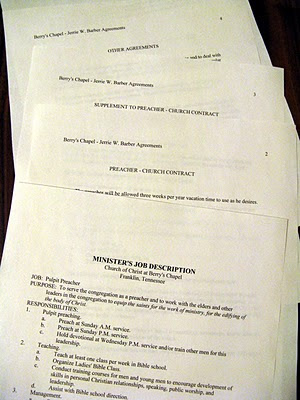 But why does a church and a preacher need a contract? We’re Christians aren’t we?  We’re honest aren’t we?  We trust each other don’t we?
My plan in the next few posts is to explain what I have learned from the University of Hard Knocks, whose school colors are black and blue and the school yell is: “OUCH!”  I have learned that contracts are not for dishonest people.  Contracts are to preserve and protect agreements made by dead people and forgetful people.
The first two congregations where I preached, I did not have a written agreement.  We talked about some things, omitted some important issues, and recorded nothing to which we could later refer.  When I took my first week off, to my dismay, I realized that we had not discussed vacations.  I assumed that every preacher received a week or two off each year with pay.   I returned from visiting family during Christmas and did not have a check for that week.  After some conversation, one elder said, “He didn’t do nothing.  Don’t give him nothing.”  The eldership remained united on that decision.
I discussed that with the next congregation and had a verbal agreement that I would have two weeks’ vacation each year with pay.  I had learned an important lesson:  don’t assume.