There are some who believe it is wrong to sing “Christmas songs” during December lest someone think that Christians are celebrating the birth of Jesus. One of the great controversies in one congregation was whether to hang “Christmas wreaths” on the door for the same reason. The biggest protest of that event was by an elder’s wife who was irritated that wreaths were hung on the door. She made her complaint while wearing a green sweat shirt with a Christmas tree on front. The lights outlining the tree were blinking in my eyes as she registered her objection just before Sunday services.

We had friends who thought that it was wrong to celebrate Christmas as Jesus’ birthday and wrong to exchange presents on Christmas. When we visited them on the Wednesday night before Thanksgiving, their dining room table was full of presents. We asked, “Are you exchanging Christmas presents?” The answer was, “Absolutely not. We just decided to get something for each other.”

There are those who choose to think about the birth of Jesus and thank God for His birth, life, and death during December. But some of these same gracious people also want to ridicule and scold conscientious and faithful followers of Jesus who choose not to celebrate His birth any more on December 25th than they do on the 4th of July. Surely people who would not set aside this special day started by we don’t know who and when must be narrow-minded, unspiritual, and against reaching out to others.

Is either approach to this wonderful time of year – as well as other wonderful times of year – one that enhances love, respect, and unity in Christ’s body? Is there a scripture that tells me and others that it is either or and that I should disparage those who don’t do it my way? Does God address this?

“Receive one who is weak in the faith, but not to disputes over doubtful things…Who are you to judge another’s servant? To his own master he stands or falls. Indeed, he will be made to stand, for God is able to make him stand. One person esteems one day above another; another esteems every day alike. Let each be fully convinced in his own mind. He who observes the day, observes it to the Lord; and he who does not observe the day, to the Lord he does not observe it…But why do you judge your brother? Or why do you show contempt for your brother?...Therefore let us not judge one another anymore, but rather resolve this, not to put a stumbling block or a cause to fall in our brother’s way” (Romans 14:1, 4-6, 10, 13).

Churches Are "Trying Out" Also

Something that could be considered during the process of moving to another church is that not only are the preachers trying out – the congregation is watching, listening, observing them – but the congregation is also trying out. My family and I tried to be aware of every noticeable thing in our visits:

Posted by Jerrie W. Barber at 3:26 PM No comments:

What Do You Think About During the Lord's Supper?

Several years ago, someone told me about a sermon he heard James Watkins preach about what to think about during the Lord’s Supper. I have used this many times since I heard it and have found it helpful.
The following is a poem my daughter, Christi Parsons, wrote after hearing the sermon:

In Remembrance of Me

When reflecting on the Lord’s Supper
There are some things to keep in mind.
So your mind doesn’t wander
These thoughts will keep you in line.

There are seven things to remember
About Jesus and the cross.
Thank you God for sending Jesus
So our souls won’t be lost.

Well there was one Lord – one Lord
His name is Jesus Christ.
Two thieves – two thieves
One went to Paradise (with Jesus).

Well there were five wounds – five wounds
His hands, His feet, and His side.
Six hours – six hours
Our Lord was crucified.

While hanging on the cross
There were words that Jesus breathed.
When you open your Bible to the gospels
These seven sayings you can read.

For the sermon outline: > In Remembrance of Me
Posted by Jerrie W. Barber at 6:41 PM No comments:

Thoughts on Moving for Preachers and Congregations

I resigned from the Central church of Christ in Dalton, Georgia, in March, 1988. I tried to be aware, study, record, and evaluate the process of moving. I wrote several of these observations in our bulletin under "Barber Clippings". I later compiled and wrote an article on the experience.
And a vision appeared to Paul in the night. A man of Macedonia stood and pleaded with them, saying, "Come over to Macedonia and help us" (Acts 16:9). I‘m certain that I don‘t know everything that was involved, but it sure appears easier for Paul to decide to go to Macedonia than it has been for me to make the moves that I have made in preaching.
I have found little information available on this subject. I have one book and have attended no lectures or classes on being effective in making the decision to move or not to move and how to go about it once the decision has been made.
Since this process usually happens several times during the lifetime of a preacher and over a period of years in the congregation, I hope these observations will be helpful.
After having thoughts from time to time of the possibility of needing to move – beginning about a year before I actually made the change, and discussing these thoughts with my family and a few trusted counselors, I started making a list of people who knew me and my work that would be able to give suggestions and recommendations of places where I might fit.
When I came to the conclusion that I was ready to move from Dalton, Georgia, I began calling these thirty-eight people, asking for their help. After a period of time, I received calls from congregations who were looking for preachers. My decision was to investigate and cooperate with those who expressed an interest, regardless of size or location.
After about eight or nine appointments were made, I told the elderships involved that I would make a decision the last week in May. Some congregations decided that I was not the preacher for that place after I preached and/or interviewed with them. Time became a factor that eliminated some possibilities. I returned to four congregations for more detailed discussions. Stating what I believed to be my strong and weak points, asking and answering more questions, discussing how we thought that the Lord‘s work needed to be done, and how we would work together were the topics of these conversations.
The expenditure in time effort and money was great. I attempted to do all I could in my local work in Dalton in teaching, personal evangelism, counseling, and visiting as well as give honest and complete evaluation to the opportunities of each congregation. My schedule was eleven to twelve working hours per day, seven days a week during March, April, and May. Travel related to relocating totaled 6,691.8 miles in addition to the miles flown.
Expenses (some estimates) were: unreimbursed food and lodging: $63.50; phone calls (friends who could make recommendations of congregations needing preachers, preachers at each congregation for the past twenty years, other preachers and Christians in the same town or community of the church looking for a preacher, plus other references: $359.74; tapes and postage: $63.00; travel (at 20 cents per mile): $1,338.36. Total compensation: $1,195.78. The net cost to me was $628.82.
I am not complaining, just stating some facts that I have not seen in print. A preacher couldn’t make a living trying out. In fact, to do a good job and to be free to investigate, he needs to have some money saved to finance the process. Something that elders might consider is that the way a preacher and his family are treated on the "try out" weekend is loud communication about how it would be living and working with that congregation. We are usually on our best behavior when we are courting. Car doors are rarely opened after the first month of marriage.
Posted by Jerrie W. Barber at 1:48 PM 1 comment: 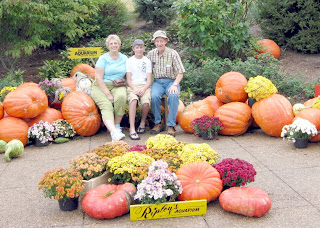 Several years ago, someone gave Gail and me an idea: taking grandchildren on a 12-year-old trip.
We have taken each grandchild on a trip by himself or herself when they are twelve. We have been with Elizabeth and Whitney Barber and Brittan and Braden Parsons. We have Dalton and Wyatt Houston Barber to go. They get to choose the place (within 300 miles of Nashville). They choose where we will eat and what we will do on the trip.
We give them some money: half to spend on themselves and half to spend on gifts for their family.
This has been a delight. I am reminded that we will never know how much good we do and when. I don’t remember who shared with us this idea. Whoever it was has blessed our life greatly.
Perhaps this will be a “mustard seed” that someone else may plant and reap a joyful harvest.
Posted by Jerrie W. Barber at 8:03 PM 2 comments: