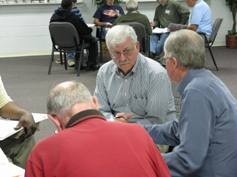 ...See previous posts on "Guidelines"
4.     Will we speak one at a time? 1 Corinthians 14:27-33
If we are working as a group, I show disrespect to the group in general and to the person speaking in particular when I begin a private conversation with my neighbor.  If it relates to the group, it should be shared with the group.  If it doesn’t relate to the group, it can be held until a break.

This has been the most difficult rule for me to enforce as a leader.  I have been leading the Third Monday Workshop stress session made up of preachers, elders, youth ministers, and other interested Christians in the Nashville, Tennessee, area since the fall of 1989.  Three times I have come to the group to suggest that we agree to dispense with this guideline because it is violated so often.  It is embarrassing for me to call to account preachers and elders who are older than I am and have more education than I have for talking when they have agreed not to talk.  But each time the group has assured me that it is important to the group process.  We still have the guideline and it seems that it has been observed better.
When others start talking when someone has the floor, I pause the one talking, turn to the interrupters, and wait for them to finish.  I then turn to the first speaker and say, “You may continue.”  I have not had to do this in a couple of years.


5.     Will we talk where others can hear or will we speak softly and in small groups where others will not know what is being said?
This is a follow-up on the previous guideline.  Unauthorized sub-grouping will destroy the group.  It drains energy and attention when some obviously do not think the person who is speaking has anything as valuable to say as what they are saying.
...to be continued...
Posted by Jerrie W. Barber at 8:00 PM